The History of Navel Piercing

Navel piercing is a modern invention and has never been recorded in primitive cultures; however the navel has long been recognized as an erogenous zone, because of the difference between men’s and women’s stomachs. Women’s stomachs differ from men’s in that they are more rounded in the lower part, are longer than men’s, have a greater distance between the navel and genitals, and are more deeply recessed than men’s; these features are often exaggerated by artists to make women appear more feminine in paintings.

The invention of the Bikini in 1953 caused a big stir because the navel was seen as being sexually provocative because of its similarity to the female genitals. The Bikini revolutionized women’s lives; along with the liberation of their clothes their lives in general became more liberated. The process was completed when Madonna started the craze for showing of the midriff in the 1980’s. The ability to flaunt their sexuality in public gave women more power and confidence in themselves.

“It is easy to pinpoint the moment when body piercing went mainstream. Christy Turlington came out at a London Fashion show, and in the middle of her navel was a ring! The next day Naomi Campbell showed the world that anything Christy could do, so could she. A gold ring with a small pearl pierced her navel. And then at Isaac Mizrahi’s show the two came out together, navels bared and beringed: body piercing as a Supermodel totem.” (Suzy Menkes The New York Times September 1994)

“I have the most perfect belly button – an inny. When I stick my finger in my belly button, I feel a nerve in the centre of my body shoot up my spine” Madonna Time Magazine 1985

“I always thought it was a pretty feminine thing to do – and you can always take it out,” Christy Turlington.

Shortly after Naomi and Christy had their navels pierced no one was surprised when Madonna, Cher and Janet Jackson were seen wearing navel rings. Now anybody can join the ranks of Celebrities and Supermodels by having their navel pierced. 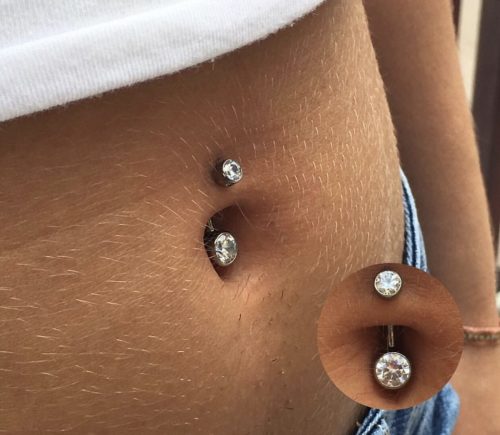