The History of Nose Piercing

Nose piercing is very attractive, and can accentuate the face, because the nose is the face’s most prominent feature. Leonardo Da Vinci believed that the nose set the character of the whole face.

Nose piercing was first recorded in the Middle East approximately 4,000 years ago. It is mentioned in The Bible in Genesis 24:22; Abraham requested his oldest servant to find a wife for his son Isaac, the servant found Rebekah, and one of the gifts he gave her was a “golden earring.” The original Hebrew word used was Shanf, which also translates as “nose-ring.”

This practice is still followed among the nomadic Berber and Beja tribes of Africa, and the Bedouins of the Middle East. The size of the ring denotes the wealth of the family. It is given by the husband to his wife at the marriage, and is her security if she is divorced.

Nose piercing was bought to India in the 16th Century from the Middle East by the Moghul emperors. In India a stud (Phul) or a ring (Nath) is usually worn in the left nostril. It is sometimes joined to the ear by a chain –  and in some places both nostrils are pierced. The left side is the most common to be pierced in India, because that is the spot associated in Ayuvedra (Indian medicine) with the female reproductive organs. The piercing was intended to make childbirth easier and lessen menstrual pain.

In the West, nose piercing first appeared among the hippies who travelled to India in the late 1960’s. It was later adopted by the Punk movement of the late 1970’s as a symbol of rebellion against conservative values. Conservative people, like parents and employers in some instances still don’t react well to it, so consider their reaction carefully before getting it done. 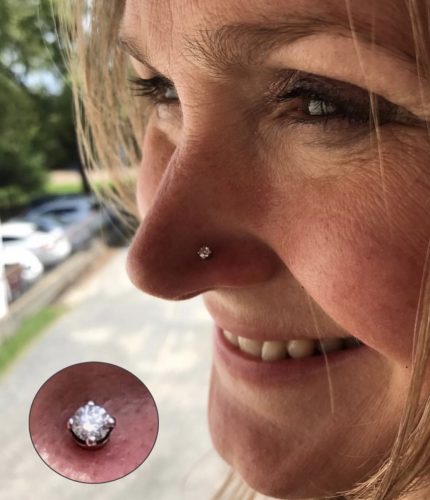